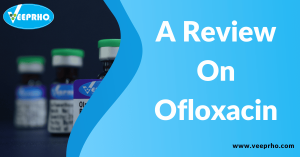 Ofloxacin is an antibiotic for treating bacterial infections; it is active against gram-positive and gram-negative bacteria.

It is from a second-generation fluoroquinolone class and is considered a broader spectrum analog of norfloxacin and was developed and synthesized by the scientists of Daiichi Seiyaku. As an antibacterial agent, Ofloxacin treats urinary infections, pneumonia, and pelvic inflammatory disease.

Ofloxacin got approval for medical use in 1985 and was patented in 1980. Ofloxacin got U.S. Food and drug administration (USFDA) approval in 1990. Ofloxacin is on the World Health Organization’s list of Essential Medicines and is available as a generic medication. It was the most prescribed medication in the U.S. in 2017.

Ofloxacin is available in different brand names and as generic drugs in the form of tablets with different strengths, injectable solutions, oral suspension, and ear and eye drops. This drug is a racemic mixture that consists of 50% levofloxacin (active biological component) and 50%, its mirror or enantiomer, dextrofloxacin.

Ofloxacin was first approved in 1985 for marketing in Japan for oral administration and was marketed under the brand name “Tarvid” by Daiichi. FDA got approval in 1990 when Daiichi was working with Johnson & Johnson. Ciprofloxacin and Ofloxacin are fluoroquinolones with differences in their clinical utility, antimicrobial activity, and other profiles.

The structure of Ofloxacin is represented as:

Ofloxacin and its impurities

In bulk, drug pharmaceuticals and formulations, the detection, identification, structure elucidation, determination of impurities, its impurity profile, and also residual solvents is the key area for the analytical department. United States Food and Drug Administration (USFDA), International Conference on Harmonization (ICH), Canadian Drug and Health Agency (CDHA), and other regulatory agencies have guidelines for the identification of impurities in the drug substance APIs. To develop the final product as per the required pharmacopeia, it is mentioned in different pharmacopeias like Unites States Pharmacopeia, Indian Pharmacopeia, British Pharmacopoeia, and other pharmacopeias. Further, there is also a need to develop analytical methods as per the given new process or the changes in the synthesis and production procedure.

The impurity profile is the most important and crucial to control the impurities like organic and inorganic impurities and their limits during the manufacturing and synthesis of active pharmaceutical ingredient API and the dosage forms.

The process and the impurities are always considered critical as it depends on the manufacturing process and its process parameters. Various analytical techniques are used to control and detect impurities at different stages during the manufacturing process. Further, they can be analyzed and characterized by using mass, IR, NMR spectroscopy, and HPLC column chromatography to get the product purity as per the pharmacopeia and ICH. The specification and the critical intermediates have limits for the specified and unspecified impurities and also the impurity profile for the final active pharmaceutical ingredient (API).

Several impurities of Ofloxacin have been isolated and purified by synthetic chemical methods and analytical techniques, which are reported in the pharmacopeia, and Ofloxacin impurities are also available at Veeprho.

Does Ofloxacin belong to a class of family?

Ofloxacin, a fluoroquinolone of the second generation, was created and synthesized by the scientist Daiichi Seiyaku. It is thought to have a broader spectrum of activity than norfloxacin.

What is Ofloxacin used for?

Antibiotic Ofloxacin is effective against both gram-positive and gram-negative bacteria and is used to treat bacterial infections. Ofloxacin, an antibacterial medication, treats pelvic inflammatory disease, pneumonia, and urinary tract infections.

What is Ofloxacin available as?

Reproduction of any materials from this site is strictly forbidden without permission from Veeprho.

This website uses cookies to improve your experience while you navigate through the website. Out of these, the cookies that are categorized as necessary are stored on your browser as they are essential for the working of basic functionalities of the website. We also use third-party cookies that help us analyze and understand how you use this website. These cookies will be stored in your browser only with your consent. You also have the option to opt-out of these cookies. But opting out of some of these cookies may affect your browsing experience.
Necessary Always Enabled
Necessary cookies are absolutely essential for the website to function properly. These cookies ensure basic functionalities and security features of the website, anonymously.
Functional
Functional cookies help to perform certain functionalities like sharing the content of the website on social media platforms, collect feedbacks, and other third-party features.
Performance
Performance cookies are used to understand and analyze the key performance indexes of the website which helps in delivering a better user experience for the visitors.
Analytics
Analytical cookies are used to understand how visitors interact with the website. These cookies help provide information on metrics the number of visitors, bounce rate, traffic source, etc.
Advertisement
Advertisement cookies are used to provide visitors with relevant ads and marketing campaigns. These cookies track visitors across websites and collect information to provide customized ads.
Others
Other uncategorized cookies are those that are being analyzed and have not been classified into a category as yet.
SAVE & ACCEPT
Powered by