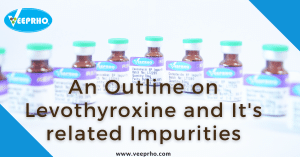 Levothyroxine is a medicine used for the treatment of thyroid hormone deficiency (hypothyroidism), to treat goiter, and also used to prevent some types of thyroid tumors.

Levothyroxine is also known as?

Levothyroxine is a levo-isomer of the thyroid hormone thyroxine (T4) prepared synthetically and is also known as L-thyroxine. Levothyroxine is available in the form of tablets, intramuscular injections, and also as a solution for intravenous infusion. Levothyroxine was first produced in 1927 and it is on the World Health Organization’s list of Essential Medicines. Levothyroxine in the year 2019 was the second most commonly prescribed medication in the United States.

Further continual process improvement in the synthesis of Levothyroxine, Research and development has taken place which leads to feasible process at a commercial level, to control the impurities as per the regulatory guidelines ICH (International Conference on Harmonization), yield improvement and various methods are available for synthesis as reported in the literature. Levothyroxine is chemically known as (2S)-2-amino-3-[4-(4-hydroxy-3,5-diiodophenoxy)-3,5-diiodophenyl]propanoic acid.

The structure of Levothyroxine is represented as:

Which are the Levothyroxine related Impurities?

Reproduction of any materials from this site is strictly forbidden without permission from Veeprho.

This website uses cookies to improve your experience while you navigate through the website. Out of these, the cookies that are categorized as necessary are stored on your browser as they are essential for the working of basic functionalities of the website. We also use third-party cookies that help us analyze and understand how you use this website. These cookies will be stored in your browser only with your consent. You also have the option to opt-out of these cookies. But opting out of some of these cookies may affect your browsing experience.
Necessary Always Enabled
Necessary cookies are absolutely essential for the website to function properly. These cookies ensure basic functionalities and security features of the website, anonymously.
Functional
Functional cookies help to perform certain functionalities like sharing the content of the website on social media platforms, collect feedbacks, and other third-party features.
Performance
Performance cookies are used to understand and analyze the key performance indexes of the website which helps in delivering a better user experience for the visitors.
Analytics
Analytical cookies are used to understand how visitors interact with the website. These cookies help provide information on metrics the number of visitors, bounce rate, traffic source, etc.
Advertisement
Advertisement cookies are used to provide visitors with relevant ads and marketing campaigns. These cookies track visitors across websites and collect information to provide customized ads.
Others
Other uncategorized cookies are those that are being analyzed and have not been classified into a category as yet.
SAVE & ACCEPT
Powered by